Preamble: This is something that I’ve been thinking about on and off for nearly a year, as a kind of synthesis of this piece on social memory and this one on making. Having heard James Bridle‘s fantastic dConstruct talk and read Richard McManus’s piece on “social objects”, it’s time to write something down. 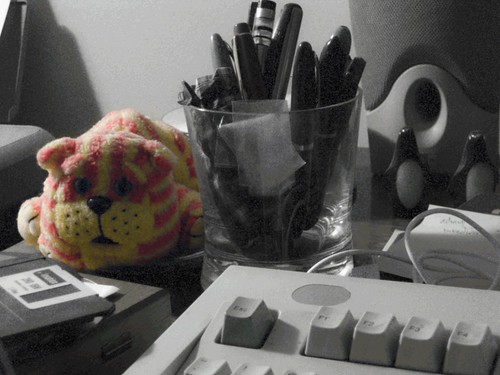 Once upon a time,
Not so long ago,
there was a little girl and her name was Emily.
And she had a shop.
It was a rather unusual shop because it didn’t sell anything.
You see, everything in that shop was a thing that somebody had once lost,
and Emily had found,
and brought home to Bagpuss.

At the heart of Bagpuss is a story of how we relate to things. The arrival of each lost thing brings the characters to life, and the characters in turn invest that thing with its own life, not just making it new but restoring to it a history and purpose. Finding things is only the beginning of a process of finding out about things.

There are two distinct strands to this process: the mice are the engineers, the renovators, the fixers and stitchers. They work with things as they are. It’s the other characters who offer up different narratives of origin — Bagpuss’s fanciful folk tales, Yaffle’s academic scepticism, Gabriel and Madeleine’s songs — that collectively work towards giving those things their rightful story and place.

It’s a model repeated in so many different places online: things that were once mute and self-contained are explicated and have their purpose and context teased out in conversations that bring together mechanical and historical knowledge. These conversations are explicit in places like Ask Metafilter or on dedicated forums, but also implicit in the ties between enthusiasts’ websites. They draw upon formal repositories of knowledge, such as scanned service manuals and catalogues that would otherwise have been lost, but they also create a lasting record of personal experience and expertise that contextualises those archives, and which would have been passed down in previous generations through word of mouth. It serves as a distributed and voluntary apprenticeship, in which technical capability is, by necessity, bound up with historical understanding.

All of this happens without formal mechanisms to transform things into “social objects”: the internet’s endless pathways turn our simple discoveries into expeditions that reveal the worlds in which those things have lived, beckoning us to become archivists and archaeologists of pasts that overlay and intertwine.

As an inveterate nostalgist historian, I’ve always got half an eye on the rough threshold between the ‘historical’ and the ‘archaeological’ internet, by which I distinguish between old stuff that’s largely retrievable somewhere, even if it’s riddled with broken outbound links, and the stuff that has to be dug out of archives or reconstructed from the memory of where those broken links once led. It’s a threshold that seems to shift further forward every time I look: some chunks of the online past disappear entirely, while others are gradually muted and objectified so that they require the same kind of explication as the things Emily brings to Bagpuss.

Perhaps a better distinction might be between ‘archival’ and ‘archaeological’, but I’ve gradually come to believe that formal archiving efforts have largely failed. This isn’t to disparage the efforts of Brewster Kahle, Jason Scott and other well-meaning digital preservationists, but these repositories are largely write-only, and it’s fiendishly difficult to pull synchronic snapshots of the web as it was and bind them to our memories and the narratives that derive from them.

This taps into the discussions of the online world’s illusion of atemporality, and the need to establish the basis for a digital historiography that provides more than just a commitment to preservation. It requires curation, and curation implies a narrative. It flourishes in the context of gently competing tales of origins and influence. (Historical arguments about the origins and evolution of the weblog, for instance, are well worth having.) It requires the tools to lay out the online past at a sufficient distance to allow us to make connections that weren’t apparent at the time, and by doing so, to question our own blurred recollections, but it needs room for those recollections to be treated as commentaries and keys and sometimes as sources in their own right.